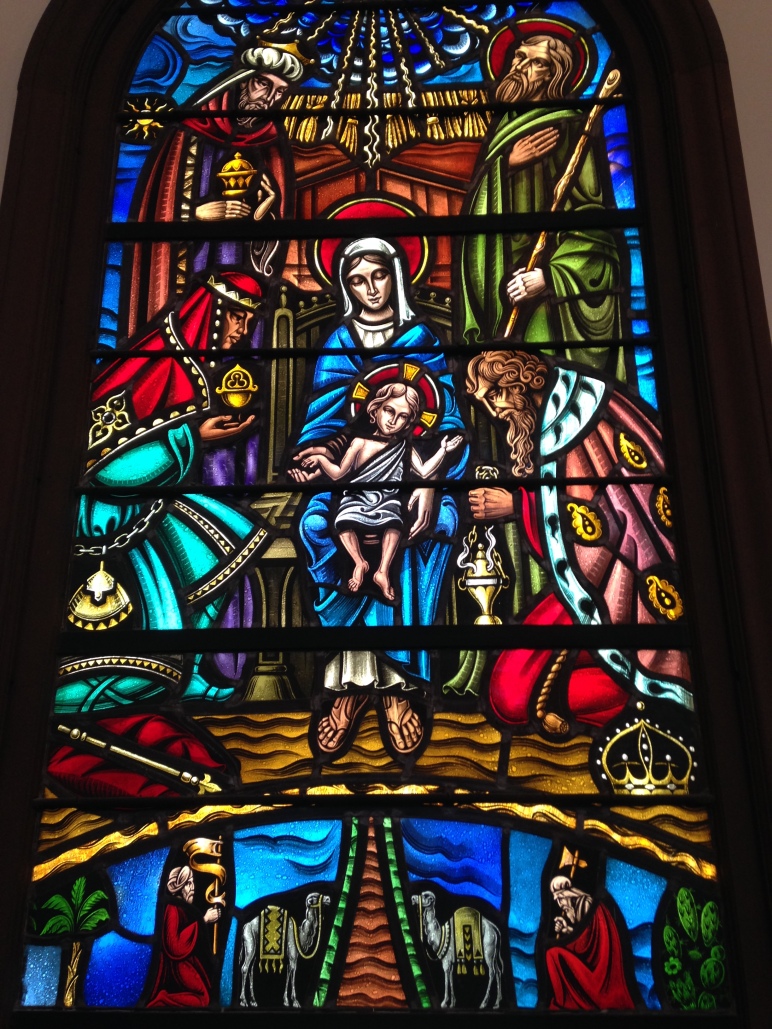 Faith from the Margins to the Web: The Sunday of the Epiphany, Year C

O God, by the leading of a star you manifested your only Son to the peoples of the earth: Lead us, who know you now by faith, to your presence, where we may see your glory face to face; through Jesus Christ our Lord, who lives and reigns with you and the Holy Spirit, one God, now and for ever. Amen.

In the time of King Herod, after Jesus was born in Bethlehem of Judea, wise men from the East came to Jerusalem, asking, “Where is the child who has been born king of the Jews? For we observed his star at its rising, and have come to pay him homage.” When King Herod heard this, he was frightened, and all Jerusalem with him; and calling together all the chief priests and scribes of the people, he inquired of them where the Messiah was to be born. They told him, “In Bethlehem of Judea; for so it has been written by the prophet:

`And you, Bethlehem, in the land of Judah,
are by no means least among the rulers of Judah;
for from you shall come a ruler
who is to shepherd my people Israel.'”

Then Herod secretly called for the wise men and learned from them the exact time when the star had appeared. Then he sent them to Bethlehem, saying, “Go and search diligently for the child; and when you have found him, bring me word so that I may also go and pay him homage.” When they had heard the king, they set out; and there, ahead of them, went the star that they had seen at its rising, until it stopped over the place where the child was. When they saw that the star had stopped, they were overwhelmed with joy. On entering the house, they saw the child with Mary his mother; and they knelt down and paid him homage. Then, opening their treasure chests, they offered him gifts of gold, frankincense, and myrrh. And having been warned in a dream not to return to Herod, they left for their own country by another road.

“There’s something about this part, right here” said Mary, “the part when they went and sought diligently for the child, but it wasn’t because Herod told them to. It was because they knew who they were searching for.”

“They were frightened” said Stephen, “they knew, then, that Herod was afraid of this child. And I think they knew his intention, but they went anyway.”

“I was drawn to the fact that Jesus, this little tiny infant, was enough to draw these people. They brought all they had. This prophecy that people had heard, they took it and ran with it. What kind of belief and faith must they have had to have followed this, and to see this tiny baby and believe” added De’Nae. “The prophecy was still going to play out; Herod thought he had the power to change that and in doing so, he destroyed lives. He tried to take it into his own hands.”

The group began to talk about the wise people and prophets that they had heard and known about in their lives and how that has shaped how they learn to trust. Thinking about that seemed to make this more real, rather than a story we imagine.

“What is the difference between prophecy and wisdom?” asked Mary.

“I think wisdom is through your life” said De’Nae, “but prophecy comes from God. I think of my Dad as a wise person, and I think maybe he even has a gift of prophecy. He raised us to know that each of us has gifts from God and he is someone who can see the gifts in others. But his wisdom: that is age, and learning and humility.”

The group began to speak about their gifts and treasures, and all the ways in which they had received blessings in their lives.

“In that opening prayer” said Mary, “we prayed, ‘lead us by faith.’ And you know, I think about they way in which I feel led by faith.

“You know, I hadn’t thought about this but it says, ‘lead us who know you know through faith…’ and it makes me wonder if that isn’t also a reminder to us that it is our faith, now, through what we have been given and through what we know to understand as best we can. I guess it doesn’t tell us that God will be just like we think God is. We might each have our own best understanding of God, which we hold onto by faith. But that’s just it…it is by faith, until we see God face to face.”

Mary said, “Coming up, we were taught that God was white but here I am a black woman and I know that God could look like me, or to be asian, or to be middle eastern. We got all hung up on making out God to be in our image, when God says we are made in God’s image, all of us.”

“I’m still rocking with God no matter what!” said De’Nae.

“I think God is the ruler of all, coming to save the world” said Stephen. “So, I don’t think God will be bound to race, or in whose image God was made in. God came to rule over all that’s in this world, to rise above all that. People might need to remake God in our image so that we feel good about ourselves but we are asked…by faith…to open our hearts to know God.”

“Sometimes I wonder why it is that we keep ourselves from believing. We want to find the things to disprove, or to move away. It’s hard to want to take something by faith. But here, in this story, the wise men meet this tiny baby and that is enough for them to be sustained in their faith and to go home by another way. They hadn’t even seen his miracles, or see him walk on water. It just took this time of seeing” said De’Nae.

The group closed considering a question together: “what treasure that you have would you give to the baby Jesus?”

Stephen started: “I would give my belief. I don’t have a lot, but I have that. I would give that of my heart.”

Lynette said, “When I go to funerals and stuff, they sing this song, “take the best of me” and I feel that way, too. Not the gold and all of that. Just me.”

The group ended up on the same theme which they summed up together in their closing prayer:

“I’m going to give You what I have, and all that I can give You is me.”

Site Photography by Patience Salgado, for Faith from the Margins to the Web content only.  All Rights Reserved.

Site Content is freely accessible; please link to this site for any re-use or re-posting to insure appropriate credit is given to our community authors.

Faith from the Margins to the Web is supported through a grant from the Episcopal Evangelism Society.